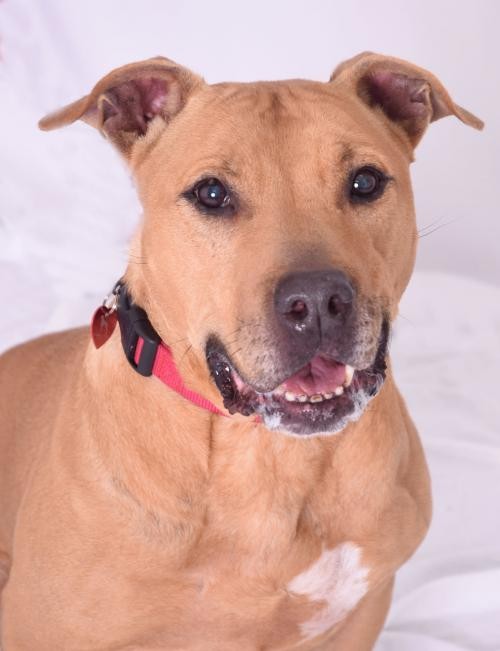 Tools
Location:
Atlanta, GA
Description:
Meet Jazzy!! Jazzy's shelter name was Jazz, and the handlers liked the name, so they decided to keep it, but make it just a little … well … jazzier!! So Jazzy it is! Jazzy had been a shelter dog more than once - that's just so sad. She was owned by someone who developed health problems and couldn't care for her, so she was relinquished to the shelter. She was adopted again, and ... not long after that, came back in much worse condition than she left. She was tethered in the second owner's front yard, she had significant hair loss, and was underweight - the note was made that it appeared as though she had not eaten in several days. She was treated for her skin condition, and she gained some weight. She developed an upper respiratory infection and was treated, and she gained some weight. She was spayed and recovered, and gained some weight. All in all, this not-so-little girl gained 23 pounds at the shelter, and is more than slightly rubenesque!! We think she was eating her food, and as much of everyone else's food as she could - poor thing probably just couldn't get past feeling so very hungry! We were drawn to her sunny disposition, so we temperament tested her, and we were thrilled when she passed!! After 185 days in the shelter, she was finally going to get to leave!! This chubby girl (we will work on her weight!!) is a sharpei / pit mix, with a golden brown coat, and smiling face. She does love so very much to give kisses - and we have the pictures to prove it!! She is extremely playful, and loves to engage in toy games with her people.Want to help us make sure that the rest of Jazzy's days are full of fun, without any chains or missed meals? Put your application in today - www.caninecellmates.org ! Jazzy is located in Atlanta, GA and is available for adoption immediately. Jazzy is spayed, microchipped and up to date on all her shots. Canine CellMates dogs are trained in items similar to the Canine Good Citizen (CGC) test. They learn basic obedience and commands such as sit, down, stay, go to place, and leave it. They are also crate trained. If you are interested in adopting Jazzy, please fill out an adoption application at www.caninecellmates.org. or email XXXX@caninecellmates.org for more information.
Breed:
Pit Bull Terrier
Category:
Dogs
Color:
Brown
Sex:
Female
Posted:
November 8 2020 on Adopt-a-Pet.com
Tools